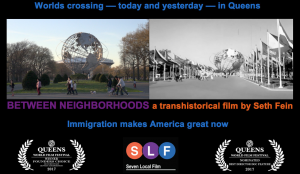 BETWEEN NEIGHBORHOODS (2018) examines the interborough and international histories of Queens, NYC, and the World that orbit the Unisphere, the largest rendering of the world in the world, between the current age of Trump and Ocasio-Cortez and that of Robert Moses, who built the mammoth Space Age armillary for his 1964-1965 New York World’s Fair, marking the crossroads of his NY metropolitan empire and expressing the modernization ideology at the center of Washington’s global empire. Combining archival and contemporary footage, SETH FEIN’s prize-winning doc works in split-screen between present and past to evoke the interplay between imperialism and immigration since the Sixties.

The film is available for rent digitally on Vimeo.

Three PW4 films screen at the Maryland Film Festival: Who Can Predict What Will Move You, Midnight Coffee, and Good News!